Our lab focuses on research questions understanding the causes and consequences of plant diversity.
Why do certain places have greater plant diversity than others? How do these patterns change through time? How does this diversity influence ecosystem functioning, recovery from disturbance, and resilience/resistance to climate change? 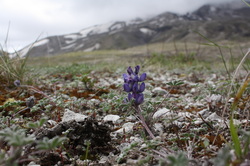 Causes of plant diversity
What mechanisms drive plant succession?
Mount St. Helens volcano (Washington, USA) erupted in 1980, creating a unique ecological blank slate in the blast zone and disturbance severity gradient well-suited to test long-standing questions in succession and community assembly theory. We use a combination of existing long-term plots, modern analytical techniques, and new field experiments to build upon existing succession theory.
Consequences of diversity
What is the importance of genetic and trait diversity on ecosystem function and resilience to climate change?
The Chang lab is part of the Undergraduate phenotyping Arabidopsis knockouts (unPAK) network. This network is dedicated to providing authentic research experiences for undergraduates at primarily undergraduate institutions. Together, the network runs coordinated greenhouse experiments to collect data on genotype-phenotype relationships using Arabidopsis thaliana mutant knockouts. In addition, the Chang lab conducts large-scale greenhouse experiments to determine the role of genetic diversity, trait diversity, and phenotypic plasticity has on productivity under drought and variable water conditions. In collaboration with Thelma Madzima, we are also interested in understanding the role of plasticity and epigenetic modification as a form of bet-hedging in a variable environment. We conduct much of this research as part of an undergraduate, upper-division Plant Ecology course and/or research-based Investigative Biology course.
How can we apply succession theory to restoration practices in an urban wetland?
Applying ecological theory about community assembly processes can potentially improve restoration practices in urban settings. In 1997, the University of Washington-Bothell began the restoration of the urban North Creek wetlands, providing a living laboratory to understand how plants and animals re-colonize an urban wetland ecosystem under human management. In collaboration with Warren Gold, Doug Wacker, Kristina Hillesland, and others, we are monitoring plant, animal, and bacterial biodiversity over the course of restoration. In particular, we are interested in understanding how invasive plant populations are establishing across the wetland and how crow roosting behavior may be contributing to this phenomena.

What are the effects of diversity on ecosystem function?
Understanding the importance of community diversity to ecosystem function has been a long standing question in ecology. Recently, there has been a growing focus on understanding the effects of other components of diversity at the population level, particularly in dominant species. In collaboration with Melinda Smith (Colorado State University), I examined the relative effects of genetic versus species diversity via traits on invasion resistance and aboveground productivity in North American tallgrass prairies. (Chang and Smith 2012, Oecologia; Chang and Smith 2014, Journal of Vegetation Science; Avolio, Chang, Weis and Smith 2014, Plant Ecology and Diversity)

How does disturbance impact plant diversity - productivity relationships?
Fire frequency in grasslands drives community dynamics and subsequent diversity patterns by altering water, soil nutrients, and light availability. In this study, I examined the relationship between genetic diversity of the dominant species, species diversity, and productivity across sites that have been subjected to a gradient of fire frequency treatments (burned every 1, 2, 4, 20 years) since 1970s. I found that genotypes of the dominant species were more genetically similar in frequently burned sites than infrequently burned sites which differed from species diversity patterns. These findings suggest that these two levels of diversity may respond differently to fire suppression and land management, with implications to ecosystem function. (Chang and Smith 2013, Journal of Plant Ecology) 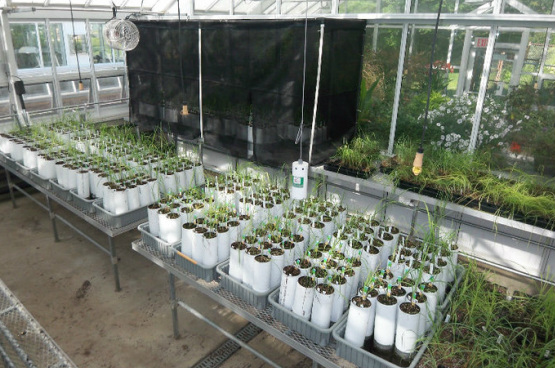 How does resource availability mediate plant interactions?
Natural and human-mediated disturbances impact resource availability, which drives plant interactions and ultimately determines ecological communities. I use controlled greenhouse experiments to tease apart mechanisms that explain observed field patterns. In the tallgrass prairie, fire frequency impacts key resources important to the dominant grass species, Andropogon gerardii. I examined how common genotypes of the dominant species coexist under varying environmental conditions. I conducted a pairwise competition experiment with four of the most abundant A. gerardii genotypes found at my field site in Konza Prairie and manipulated water, nitrogen, and light availability in a multi-factorial design. This study provides insight into how genetic diversity within a dominant plant species is maintained and could potentially impact ecosystem function. (Chang and Smith 2014, Functional Ecology)
What is the role of phenotypic plasticity in invasion?
As an undergraduate at the University of Maryland-College Park, I conducted my honors thesis on understanding phenotypic selection and plasticity patterns of Mimulus gutattus under drought and non-drought conditions (Murren, Chang, and Dudash 2009, New Phytologist) with Dr. Courtney Murren (College of Charleston) and Michele Dudash (University of Maryland). I also completed an NSF REU at Harvard Forest understanding the population dynamics and demographic structure of Alliaria peiolata with Dr. Kristina Stinson and Kathleen Donoghue.